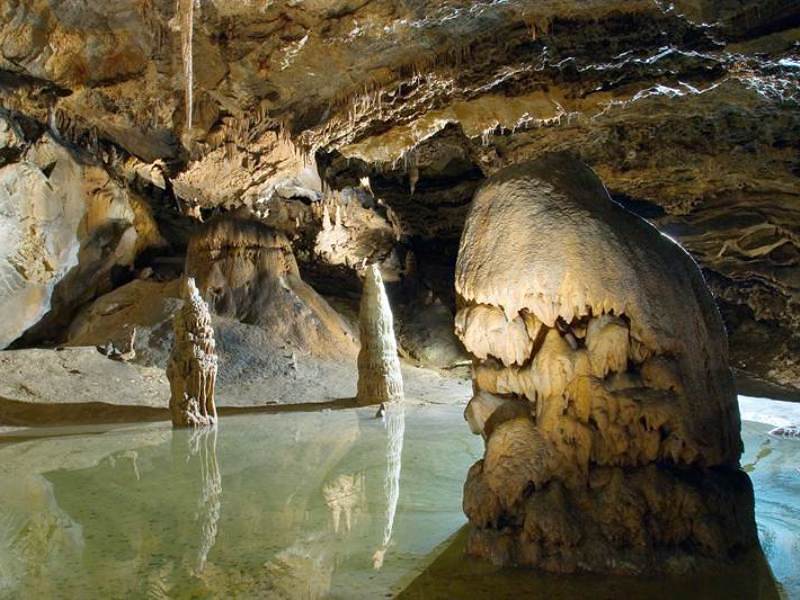 The cave entrance has long been known. The entrance parts were known by gold seekers as early as the first half of the 18th century, which is evidenced by the inscriptions of their names on the rocky walls. However they had been unrevealed for many years. The entrance was again found by L. Gulden and gold miner Fabry in 1826, however they did not penetrate deeper into the cave. In 1881 the opening to underground was accidentaly found by J. Husz and J. Britz. Some days later, they dared to enter the unknown underground spaces. Further discoveries during 1881 – 1882, as far as the Dome of Ruins, were shared by A. Kaltstein, I. Verbovszky and J. Britz. The financial support of the Spišská Belá town and thanks to A. Kaltstein, the cave was open for public through the original entrance as early as 1882 in a section to the Palm Hall, and in the end of the year they dug the present entrance. The cave was opened for public as far as the Dome of Ruins in 1884, from where by digging out a tunnel into the side passage from the Crossroads the path was circulated in 1885. Electrically lit is the cave from 1896. K. Piovarcsy, G. Gabriel and other members of the Carpathian Convention discovered new spaces near the Outlaw’s Chamber and Musical Hall in 1926. Boulder Passage, Column Dome and opening to the Hell Abyss was discovered by P. Klepáč in 1935. The cave survey was organized by V. Benický in 1939. Large reconstruction work were done in the fifties of the last century and during 1979 – 1980 the path was adapted by an adit between the Loamy Passage and Dome of Ruins. The cave is used for healing speleoclimatic stays in the last years. More than 1,000 m with elevation range of +125 m is open for public at present.