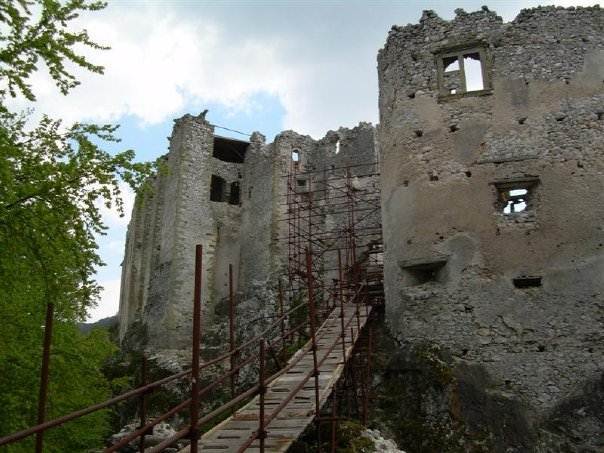 On one of the hills in Strážovské Mountains lie the imposing ruins of Uhrovec Castle. Thanks to its fairly inconspicuous position, the castle was not subject to fierce battles as were its strategically more important counterparts, and therefore it is reasonably well preserved, with a number of  valuable architectural details. One of the strong points of Uhrovec Castle is the breathtaking panoramic view of surrounding mountain ranges it offers, which leaves only few visitors uninterested. This great view, apparently, was instrumental when the castle was besieged by the Turks. According to a legend, a brave noblewoman in charge of the castle spotted the Turkish commander among his troops, and with one precise shot with her bow and arrow she sent him into oblivion. Terrified by the marksmanship of local women, the Turks did not wait around to get shot at by local men, broke the camp and never returned.
Those considering a visit to the Uhrovec Castle should also visit the nearby town of Uhrovec with a museum dedicated to Ľudovít Štúr and Alexander Dubček. What is also worth visiting is the nearby Janko’s Hill with Slovak National Uprising memorial.