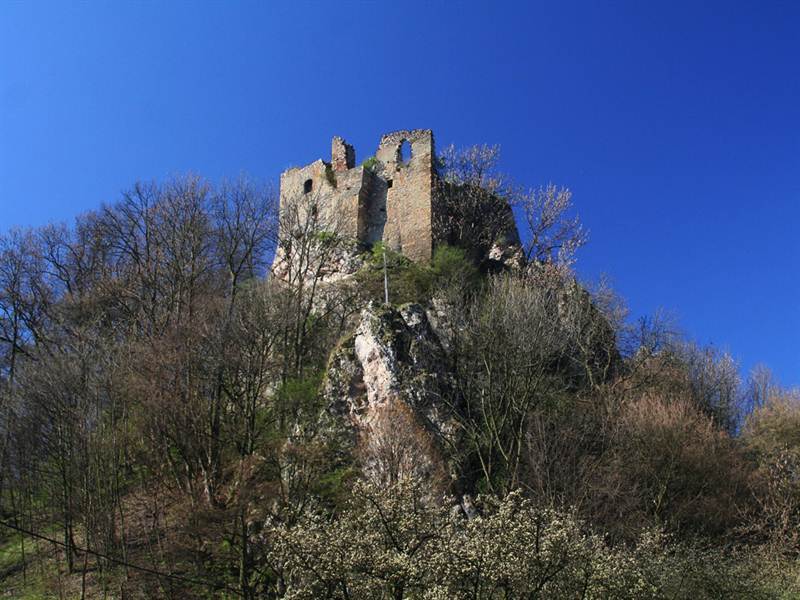 Towering on a rock above the town of Lednica, not far from the town of Púchov, lie the ruins of the medieval Lednica Castle. It is perhaps the most inaccessible castle in Slovakia. In the past there used to be only one way into the castle, which led through two drawbridges and a ten-metre-long tunnel dug through solid rock. The tunnel is still used to get into the inner part of the castle. A legend says that a very long time ago there was a lusty count who wanted to seduce a local girl named Katarínka. When Katarínka got married, as the lord of the castle, he wanted to assert his right of first night. Katarínka, determined to die rather than be unfaithful to her husband, slipped out of the count’s slimy embrace and hurled herself out of the window. To this day Katarínka’s Cross marks the place where she died. Further down from the castle is Katarínka’s Spring and a tablet commemorating J. A. Komenský, who used to visit the spring. The rock on which the castle sits offers a great view of the surrounding scenery and is a part of White Carpathian Klippen Belt. There are other places within the klippen belt that are worth visiting; among them is the Vršatec Klippe with Vršatec Castle, or the needle-shaped Červený Kameň Klippe.