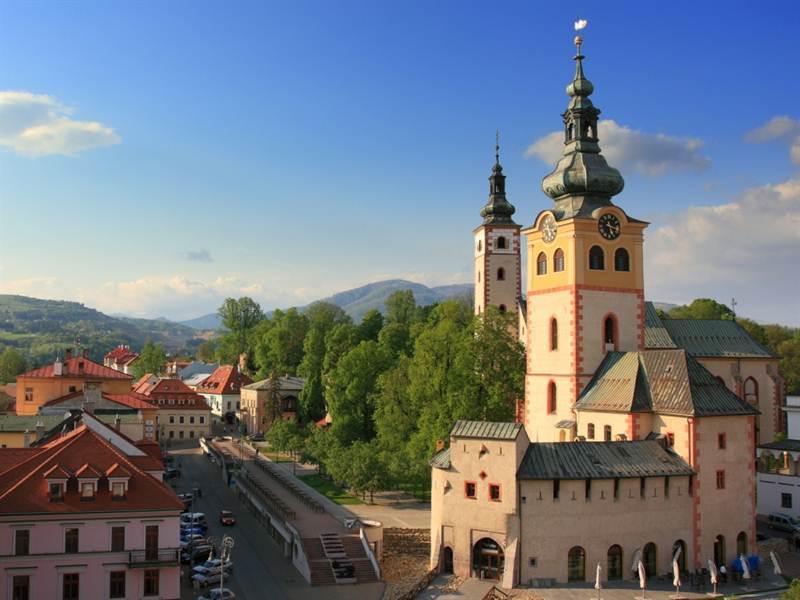 The historical centre of the city of Banská Bystrica, considered the heart of Slovakia, is dominated by a stately complex of ancient buildings belonging to the local castle. The oldest of these buildings is the exquisite Church of the Assumption of Virgin Mary with st. Barbora’s Chapel containing a rare piece of Gothic art – a wooden altar crafted by Majster Pavol z Levoče (Master Paul of Levoča). Matejov dom (Matej’s House), named after king Corvinus’s stone coat of arms, houses the branch of Stredoslovenské múzeum (Central Slovakia Museum) in Banská Bystrica with a collection of nearly three thousand items mapping the history and the folk culture of the city. The town hall, also a part of the castle complex, is used by Stredoslovenská galéria (Central Slovakia Gallery) for staging exhibitions. However, be very careful when exploring the very old Heart of Slovakia and its numerous interesting historical buildings.. It is said, that a part of Štefan Moyzes square that used to be also known as Vlčí obed (Wolves’ Lunch), sometimes has wafts of heavy air. Legend has it, that once, after a brutal attack of Tatar raiders, a group of beaten, exhausted and frustrated citizens of Banská Bystrica returning back to their homes witnessed a gruesome scene – a pack of wolves tearing apart helpless human bodies. By the time the awe-stricken citizens managed to recover their wits, the feral canines snatched one of them and added him to their feast too.