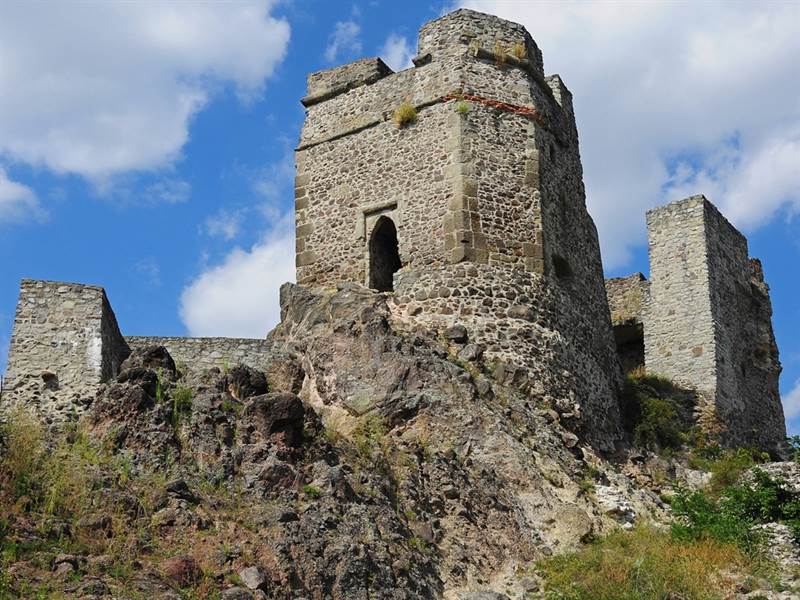 Sat on one of the volcanic promontories of Štiavnické pohorie (Štiavnica Mountains) near Levice, are the well-preserved ruins of a Gothic castle with a beautifully preserved manor house and a charming captain’s house in the castle foregrounds. From the touristic point of view the most attractive is captain’s house mentioned above that houses Tekovské múzeum v Leviciach (Tekov Museum in Levice) showcasing a number of interesting ethnographic, historical, natural sciences or numismatic collections. Apart from people who want to learn something new and admire the castle and its museum, also people interested in mysteries and macabre legends will enjoy themselves. The castle is featured in several generally known legends. In one of them the listener is taken deep into the Middle Ages, when one noble named Felicián Zach attempted to assassinate the king. In his attempt poor Felicián not only lost his own life, but also caused the death of his relatives – the king arranged to kill three generations of his family in revenge. His daughters were no exceptions and were not spared either. One of them was horribly disfigured and cruelly murdered, the other one, the beautiful Šeba, was beheaded in white robes in the courtyard, as a sign of her innocence. It is said her spirit has never found rest and to this day every night roams the castle, mourning and looking for her unjustly murdered loved ones.