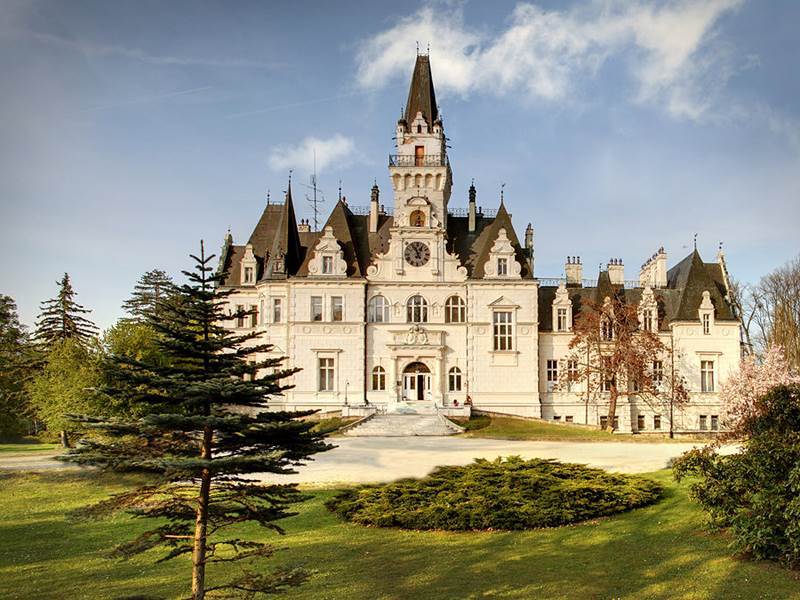 The vast English park on the outskirts of Budmerice is lined by a long vista of poplars, at the end of which unprepared visitors are astonished by a breathtaking view of the picturesque manor house that was commissioned to be built by Ján Pálffy, supposedly nicknamed “the last Carpathian romantic”. This wealthy count reportedly fell in love with a charming French noblewoman, to whom he wanted to propose. Therefore, in order to make her feel at home, he had had his residences rebuilt and redecorated in the fashion of the French manor houses. Unfortunately, by the time the construction works on Budmerice Manor House and other residences (for example the castle in Bojnice) were finished, his beloved countess married someone else. After that, Ján Pálffy never married. Nowadays, the interior of the Budmerice Manor House is closed to the public. The building is waiting for restoration and its further fate has yet to be decided. It may once again serve as the Slovak Writers Home, just like it used to be from after the end of World War II until 2011, when it offered a peaceful and quiet environment to Slovak writers such as Margita Figuli, Ivan Krasko, Ján Smrek or Rudolf Dobiáš, just to mention a few.

Opening hours: The interior of the Budmerice Manor House is not open to the public.

Admission Fee: The interior of the Budmerice Manor House is not open to the public.